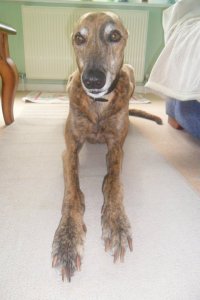 WeLL here he is the little tinker he sit’s waiting for his chew stick , this is one of my favourite pictures of him.  He is a strange little fellow and know’s exactly what he wants and when. If it is raining outside he stands at the door takes a look and run’s indoors. He picks up my slipper and carries it off , but he doesn’t tear it. His bed’s consist of duvet’s and a cover but sometimes I think that was a mistake. On my last visit from my sister he got so excited (unknown to us) tore open the duvet and pulled out the filling AH ! the room was full of stuffing just like a snow storm. Oh how we laughed well you had to didn’t you , we couldn’t get cross as he was only being himself and I didn’t want to take that away from him. He turns eight this September so he is still a young man after all. 🙂 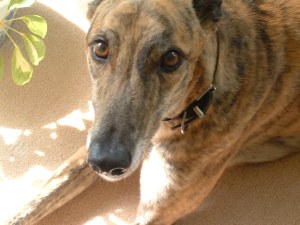 Sitting in the Sunshine

Look at those Ears

He loves watching the television especially if it’s a nature programe , the panda’s took his fancy the other evening. I often wonder what goes through his mind, he doesn’t bark or anything. He’s a happy boy and so glad I found him at the rescue centre , he just goes on surprising me. 🙂

Well I hope that you are all having a lovely weekend , and this made you smile .
Have a Happy Saturday 🙂 CATCH you LATER .

A young at heart Lady now retired and just trying to enjoy Life and making the most of things. Passionate about the Wildlife. I have owned two Greyhounds over the past 12 years, and just Love them to bits. Soon I will rescue another . The country is the place to be if you love the peace it holds.I love walking along the beach on a fine day sun even better. Reading Posts about other peoples every day lives , in my home land England and other parts of the world.
View all posts by natswans »

Memories are made of this

I need photos to keep my memories alive

Try even if you fail but never fail to try.

A Good Blog is Hard to Find

For ourselves, friends and family...

Life in The Suburbs--The good, the bad and the ugly

Our Neck of the Woods

Musings of a Penpusher

A Taurean suffering from cacoethes scribendi - an incurable itch to write.

The end of an era, goodbye WLS, almost 5 years of my life is posted here...

Believe nothing, no matter where you read it, or who said it, no matter if I have said it, unless it agrees with your own reason and your own common sense. Buddha.

Walking in the sunshine...